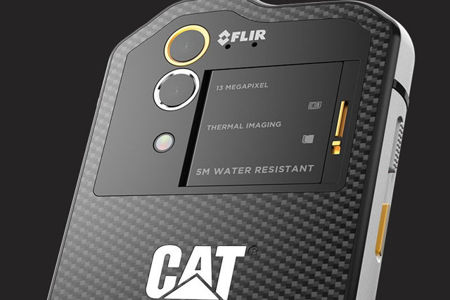 Now here is a smartphone that many of us might want to sit up and pay attention to. It will not be a famous model from a well known manufacturer in the vein of Samsung and Apple, but you can bet your bottom dollar that the Cat S60 is one tough cookie – far tougher than what Samsung, Apple, Lenovo, HTC, Motorola and the ilk have thrown into the market so far. After all, the new new flagship smartphone known as the Cat S60 happens to also be the world’s first smartphone to come with an integrated thermal camera.

Sporting an embedded Lepton Thermal Microcamera Module that is powered by FLIR, this Cat S60 is able to visualize heat which remains invisible to the naked eye, as it highlights temperature contrasts, and can be accessed on the S60 thanks to the specially designed MyFLIR thermal camera Android app. Among the key specifications of this handset include the ability to capture still thermal images, video, panoramas, and time lapses, have images and videos enhanced with FLIR’s multi-spectral dynamic imaging technology (MSX), being able to swipe between thermal and the corresponding visual spectrum saved images, can apply up to three movable spot meters and a fixed region of interest to read temperature data directly off the live image feed, or from saved images, among others.

In terms of its hardware capability, the Cat S60 is really, really impressive. For instance, it is waterproof to depths of up to 5 meters for an hour, is drop proof to 1.8m on to concrete, MIL Spec 810G, dustproof, thanks to a strengthened die cast frame, has a Corning Gorilla Glass 4 display that is super bright at 540 nits, an optimized 3,800mAh battery, a 13MP shooter with dual flash that works underwater, letting you take selfies with its 5MP front-facing shooter as well, 4G LTE support, a Snapdragon 617 octa-core processor, 32GB of internal memory and 3GB of RAM, all running on Android 6.0 Marshmallow right out of the box.