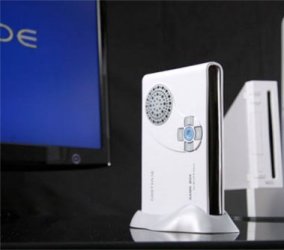 Sure, consoles are terrific for playing games on the television, but there is a problem when you play them on an LCD monitor. Adapters of all types have come out, but many of them cause the console to go to a low-quality video mode.

Fortunately, Castrade’s Game Box, or CS-USC02HD, could be the bridge between console gaming and LCD monitors. The device is designed to accept video input from any video cable, such as the Wii, PS2, PS3, or Xbox 360. That, and other gaming systems that die-hards are still playing.

With the Game Box, the resolution should be at 1920 x 1200, or WUXGA. By the way, it can also accept audio inputs from other console connectors, and even send them out via 3.5 mm jack.

Some of you might admire the aesthetic of this Game Box. After all, standing a console on its end was pretty popular for the Wii and even the PS2. Why not with this guy? By the way, what do the buttons on this thing do? It almost looks like it is a controller or something.

Well, there is no word on when this device will actually be out, but it could be pretty revolutionary for LCD monitors and gamers.