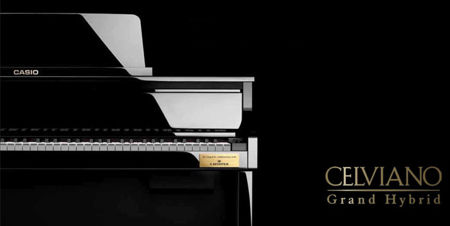 When one thinks of a grand piano, most of the time one would have a grandiose vision of a massive music making instrument that looks regal no matter which angle you view it from. Well, Casio might be a familiar name among us when it comes to scientific calculators, G-Shock timepieces that are tough as all get out, and even cool entry level digital cameras, but did you know that they also churn out musical instruments? 1980 saw Casio America show off the very first electronic keyboard, calling it the Casiotone CT-201. Since then, Casio has continued to move forward in the digital musical landscape, and their Celviano Grand Hybrid digital piano range is another major achievement.

Casio’s continuous pursuit of a keyboard with a touch like a grand piano’s has resulted in them looking into the development of a new keyboard system, which is called the Natural Grand Hammer Action Keyboard. This is a unique technology that will include full-length piano keys which rely on similar materials and processes as in C. Bechstein grand pianos.

Where the “Natural Grand Hammer Action” is concerned, the weight and the mechanism of a Grand Piano were precisely recreated. The Celviano Grand Hybrid piano range also boast of a new original action mechanism that was developed by Casio, as it delivers authentic grand piano hammer movement that would change the playing response of a grand piano, as it conveys delicate finger nuances more accurately, and enables dynamic touch, allowing the pianist to play in a completely natural way.

Apart from that, there is the AiR Grand Sound Source that faithfully recreates the same sound and reverberation like that of a grand piano. In the event of a gradual crescendo, the technology enables even and natural tonal changes, while the String Resonance System has been designed to deliver the string resonance of a grand piano. These will not arrive cheap at all though, as the GP-400BK sports a $4,999 sticker price tag, while the GP-300 will retail for $3,999 a pop with the GP-500BP going for $5,999.