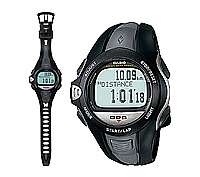 Casio has taken the step to introduce yet another GPS watch with the GPR-100 which is a radical departure from the very first GPS watch they released some time ago. The new GPR-100 is actually the smallest GPS watch available in the market currently, measuring a diminutive 63.1mm x 49.5mm x 17.1mm. Since it also looks the part of a watch, airport security won’t be hankering after you as a terrorist suspect. The GPR-100 has its sights set on runners since it will be quite some time to get a general-purpose GPS navigation device slapped around your wrist, but it does come with a decent set of GPS features which we’ll take a look at.

The GPR-100 receives signals from at least three different satellites and will take that data to compute where you are (in case you’re a clueless runner), your current speed, the length which you have covered and have yet to cover, and even your pace, doing away with the need to use your need to measure the route with the car’s odometer. Some of the other interesting functions of the GPR-100 also includes automatic time zone adjustment, enough storage space for up to 100 points of interest, an automatic electro-luminescent backlight, a stopwatch, pace verification, and a countdown timer.

Unfortunately, the internal rechargeable battery isn’t too hot when it comes to performance. The GPR-100’s battery can only last up to 2 hours in normal mode and double the amount in low power mode. The law of diminishing returns apply here as it requires 3 hours to fully recharge. The Casio GPR-100 is not heading to the U.S. anytime soon, but it is already available in Japan for $467. There are cheaper alternatives out there in the market, such as the Garmin Forerunner 205, so unless your name is Mr. Bottomless Pocket, the GPR-100 ought to be heavily considered before making a purchase.