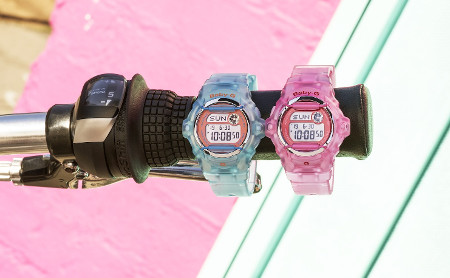 Casio surely makes plenty of good looking watches, and one of their most famous lines would be the G-Shock range which is more than capable of handling rough knocks, drops, and even harsh climates, all the while reveling in the rain. While G-Shock watches are robust and tend to be large in size, the ladies have a choice in the form of the Baby-G line, offering the basic shockproof attributes of a G-Shock, while maintaining a feminine look to match. Casio has decided to spruce up your summer with another two additions to the popular BG-169 range: the BG169R-2C and BG169R-4E, which will arrive in light blue and light pink colors, respectively. Regardless of which model you decide on, both will feature translucent bodies and bands with a matte finish in bright colors.

Paying homage to earlier years, these timepieces reflect a unique neo retro theme, boasting of pop colors that are inspired by the games, music players, and cassettes of the 1990s. Those who are born in this century might even scratch their heads and wonder just what a cassette is. The BG169R-2C will arrive in a translucent blue with orange accents, while the BG169R-4E is set in a translucent pink with red accents. Either way, the BG-169 models are a surefire way to be a stylish addition to any wardrobe while retaining highly functional features.

Among the features include water resistance of up to 200 meters, shock resistance, an EL backlight that makes it easy to tell the time at night, World Time (29 time zones across 30 cities) to help you keep track of what time it is back home, 5 daily alarms for those who love to snooze, a 1/100th second stopwatch, and a countdown timer. Both the BG169R-2C and BG169R-4E will come with an asking price of $79 apiece for those who are interested in a highly affordable and functional timepiece that is more than capable of taking a beating while looking great.