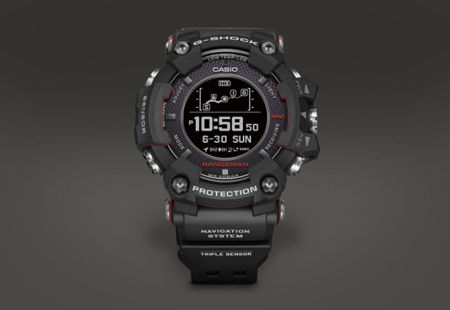 When it comes to rugged and tough tactical watches, one particular name stands out from the Casio brand, and that would be the G-Shock family. Over the years, there has been many different kinds of G-Shock timepieces that have stood the test of time, but just how many iterations and designs can you churn out without moving on with the times? This is exactly what the latest Rangeman watch from Casio tackles, where the Casio Rangeman GPR-B1000 will boast of being the world’s first solar-assisted GPS navigation, arriving in a couple of models.

Those who are interested ought to know that the Rangeman happens to be part of the “Master of G” series of watches that has been specially designed for use in the most extreme conditions. With the GPR-B1000, it will incorporate the Triple Sensor that can measure compass bearing, atmospheric pressure/altitude, and temperature, all based on the concept of “Survival Toughness.”

Not only that, the new GPR-B1000 is also capable of GPS navigation, making this the very first of its kind for a G-Shock watch. The GPR-B1000 will be able to collect location data from GPS satellites where it displays the current location on a route or bearing to a destination, and all of it is done in real-time. It is also exciting to know that watch can save track and point data (including longitude/latitude, altitude, and temperature) in its own memory. Riding on a Bluetooth connection, the timepiece pairs itself with a smartphone to hook up to the G-Shock Connected app. This app opens the door for the user to create routes or manage log data in the app. Apart from that, tracks and point data saved in memory can also be shown on a 3D map or as a timeline, in addition to picking up data from time servers to keep accurate time anywhere in the world.

It will boast of wireless and solar charging systems, while the GPS functions will work for up to 33 hours on a wireless charge that takes around five hours.The GPRB1000-1 and GPRB1000-1B will cost $800 apiece when it arrives later this April.