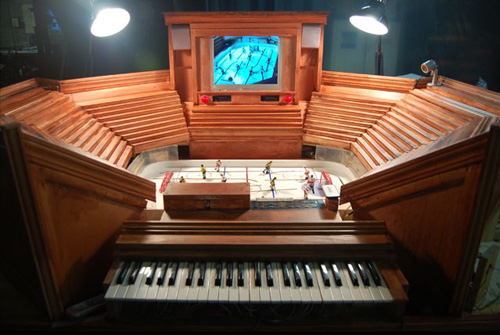 Go ahead. Try as you might. But there is a huge shade of skepticism now pulled over our eyes that you or anyone else could ever create a table hockey table cooler than this one. Come on! We dare you! Yeah, we just really want to see some awesome table hockey tables.

Straight from the mind of Graeme Patterson, the Hockey Organ has got to be the coolest used of a synth mod that we have ever seen. Using a Casio SK1 keyboard and a host of video cameras, each hockey player is controlled via a key on the keyboard (A=goalie, C#=right winger, so on and so forth).

Discovered as an entry in the “Arena: The Art Of Hockey” art gallery in Halifax, the Hockey Organ not only shows a unique form of controlling the hockey players, but also includes an arena-inspired design, as well as video cameras which capture the action on a mini Megatron display right on the device.

All we can say is “Wow!”. Sure, it’s not going to cure cancer or move us any closer to world peace (unless George W. Bush and Osama Bin Ladin want to get together for a little Table Hockey shindig.), but it’s sure to keep us busy for at least a few minutes. Our collective mouths are watering.

Source via Matrixsynth and BB Gadgets