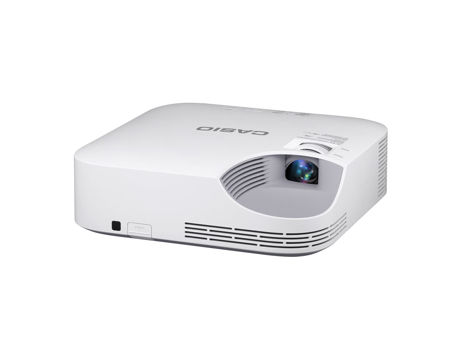 When I think about the brand Casio, most of the time my mind would return to the days when I was in high school and college, where algebra and calculus classes required me to make use of a scientific calculator, and Casio was one of the brands out there worth relying on, apart from the likes of HP and Texas Instruments, of course. Casio does deal with other kinds of consumer electronics too, ranging from compact digital cameras to projectors as we have seen in the past. This time around we have a spanking new projector model that will target both education and business sectors – the Casio EcoLite XJ-V1 projector. What makes this projector special is the fact that this will be a lamp-free model.

The Casio EcoLite XJ-V1 projector will be powered by Casio’s 5th generation LASER & LED Hybrid Light Source technology. This LampFree light source would merge a laser, fluorescent element and LEDs so that it can generate high brightness and a 20,000 hour estimated lifespan, delivering minimal brightness degradation despite continuous operation. Not only that, it will also be able to offer a 30% increase in LED light output, which results in a greater increase in color spectrum when one compares it to a mercury lamp.

Casio’s LampFree projectors would also help you save money in the long run, since it consumes just half the amount of power per unit as opposed to traditional lamp-based projectors. Power consumption with the brightest setting happens to be only 180 watts and eco modes would see a reduction in power consumption by up to 50%. You also no longer need to replace expensive and hazardous mercury lamps, making them more cost effective and safer for the environment.

Other features include a throw ratio of 1.54-1.7: 1, producing 2700 lumens of brightness, and XGA (1024 x 768) resolution which is suitable for displaying content from video and computer sources. Connectivity options include inputs for RGB and HDMI, alongside a Variable audio output for external audio.