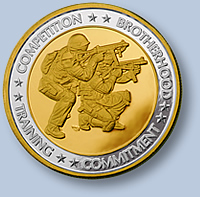 According to the American Defense department some mysterious coins were found in contractors that were traveling trough Canada (three separate events were registered early in 2006). Why the coins were mysterious you might ask? Because apparently they contained small radio frequency transmitters inside them, with the purpose of spying.

Yahoo news has an interesting article about the deal: “Experts said such tiny transmitters would almost certainly have limited range to communicate with sensors no more than a few feet away, such as ones hidden inside a doorway. The metal in the coins also could interfere with any signals emitted”.

The article also commented that “hiding tracking technology inside coins is fraught with risks because the spy’s target might inadvertently give away the coin or spend it buying coffee or a newspaper.” (no shit man!).

I wonder how long we will have to wait to find those Canadian coins on eBay!

Anyway if you are looking for more spy gadgets check the Wireless Spy Camera, a very small camera ( 3x3x4) with night vision incorporated and wireless capabilities. The camera is able to transmit the signals (audio and video) up to 100 meters, and all you need to do is to plug the receiver on the television.

Alternatively you can go with the GPS tracker: “Once the tracker has done it’s travels and it’s back in your possession you simply connect it to you PC and download the data. This data can then be plotted on Google Earth, Mapquest, maps.google.com and Virtual Earth to show exactly where it’s been, how long it took and how it got there.”