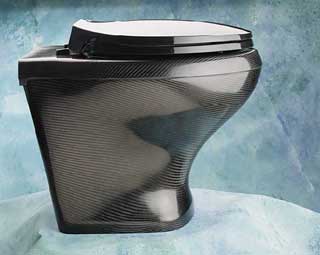 We’ve already featured too many toilet gadgets ; intelligent toilets, toilets with a built-in aquarium, and the list goes on.

Regular coolest-gadgets visitors have noticed a distinct UK bias to this blog, perhaps by our spelling of ‘colour’ and ‘tyre’ and even ‘fibre’, but maybe another dead giveaway is our obsession with toilets – we even have our own British Toilet Association.

Carbon-fibre technology has apparently been around since the 1970’s, but I first came across it when McLaren, the Formula 1 racing team developed the first carbon fibre chassis in 1981. Since then carbon fibre technology has been used ubiquitously in racing cars, bikes, skateboards, and especially in aircraft where its unique strength and weight-saving properties have almost revolutionised the aerospace industry, and of course there’s also its use for stealth applications too.

So if carbon fibre is synonymous with high-performance vehicles, why use it to make a loo? Well apart from the fact that it looks totally cool, you’d have to look at the manufacturer’s website, which suggests that their carbon-fibre closets might be useful for “racing enthusiasts and the person who has everything else”.

However, a quick look around their site suggests to me that it’s more likely an off-spin from their niche, military products.  In any case, costing $1000, it would look great in any bathroom.