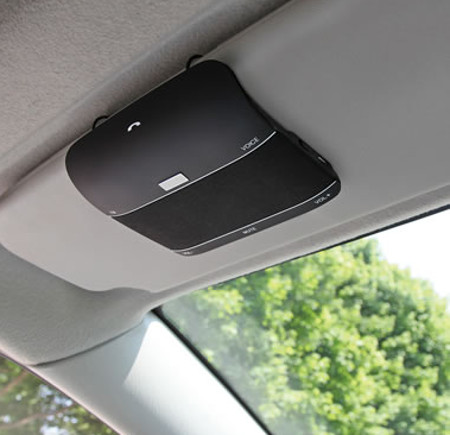 Speakerphones do come in handy if you happen to be a busy bee all day long, and have plenty of phone calls to attend to and yet would need to use both of your hands for whatever task you’re involved in. After all, not only do speakerphones let you keep in touch with the caller, it also makes traveling safer, especially when you are the one behind the wheel. Hammacher has what it claims to be the best Car Speakerphone that will retail for $99.95 a pop.

Why did this particular car speakerphone pick up “The Best” rating from the Hammacher Schlemmer Institute? For the simple reason – it delivered the clearest audio when tested. This is made possible thanks to the Best model’s dual microphone that does away with background sounds courtesy of its noise reducing technology. Being different from lesser models that caused muffled sounds or echoes, The Best unit’s three-speaker virtual surround sound offered audio that was deemed to be as clear as listening to the radio. One can mount it to a visor and have it connect automatically to your iPhone or Android handset via Bluetooth when you enter the vehicle. The included software will enable one to make and answer phone calls using voice commands and an FM transmitter leaves the door open for one to stream phone calls, podcasts, music, and GPS directions via the car’s stereo speakers. It takes two hours to juice it up with the included USB charger, where a full charge delivers 14 hours of talking time or 960 hours of standby time.