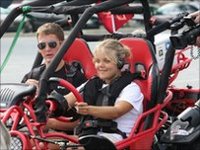 Scientists from the US as well as the National Federation of the Blind are currently working together to develop a new kind of car for the blind, and they hope to unveil at least a working prototype sometime next year. This vehicle will be fitted with technology which enables a blind person to actually drive independently, according to the NFB and Virginia Tech University. Needless to say, there will be plenty of technology packed into such a vehicle, where among the non-visual aids include sensors indicating turns in the road via vibrating gloves. Apart from that, puffs of compressed air on the face will help alert the driver to obstacles. Of course, that is not all, since other aids will be thrown into the fray, where among them include a vibrating vest which provides feedback on speed and a steering wheel with audio cues and spoken commands which indicate the car’s direction.

Sensor lasers and cameras function as the eyes of a buggy which was a precursor to the car for the blind which is currently being fleshed out. The model which will be presented next year will be a modified Ford Escape sport utility vehicle, and that my friends, is no small vehicle as you know. NFB president Marc Maurer says, “We’re exploring areas that have previously been regarded as unexplorable.” Apart from that, projects such as this car will help change people’s perception of the blind, where many out there still think that blindness ends the capacity of human beings to make contributions to society. Needless to say, many people initially thought of Mr. Maurer’s idea as crazy when he talked about it a decade ago, but then again hasn’t mankind progressed over the years simply because of the stubborness of a select few who went ahead with their “crazy” ideas?

For those who are interested, the prototype is expected to be publicly tested by a blind driver on where else but the Daytona race track in Florida next January. That is just half a year away, and we do hope that the test will be a resounding success.