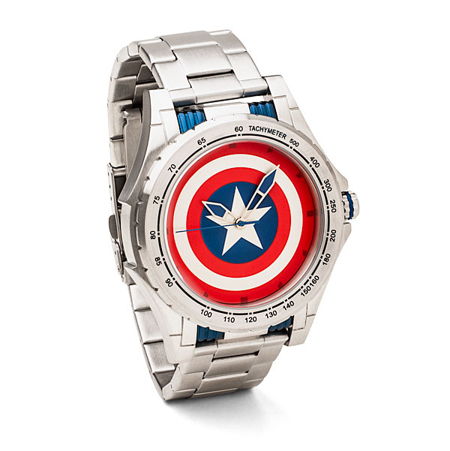 Steve Rogers, the weakling who gets his butt kicked around all over the place before he was injected with the most American thing in the 1940s, steroids – I jest, a Super Soldier serum, in order to let his physical ability catch up with his patriotic fire, also needs a watch to tell the time. You know, so that he is able to execute whatever plan that the Army has for him in tandem with the rest of the team, and not go off all on his own at his pace just because he has this Super Soldier moniker stuck to him. Well, no ordinary watch is going to do then, so why not let him settle for the $129.99 Captain America Executive Shield Watch?

The Captain America Executive Shield Watch is a Super-Soldier’s super watch, where it boasts of solid stainless steel construction with Cap’s shield right smack on the face. Do bear in mind that this is an officially-licensed Marvel merchandise, and it comes in a box as well that makes it suitable for gifting. Cap’s shield is on the face of the timepiece, where it boasts of blue highlights on the hands, case, and crown. It is water resistant up to 3 ATM, and will run on SR626SW batteries.