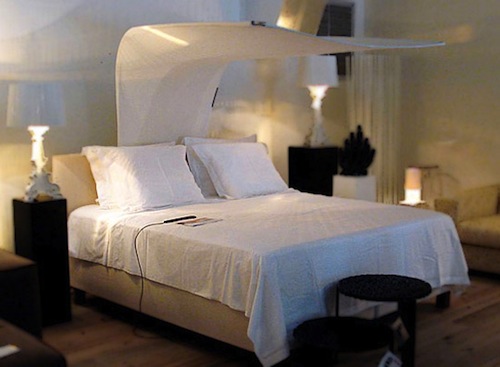 I suppose you could call this the canopy bed of the future, provided the future had the white and sterile look of certain dystopian science fiction films.

The purpose of the “canopy” on this Canopi system bed isn’t for aesthetics, but designed to cool the bed itself. Think of it as a cooling blanket for a canopy bed, but the blanket lies on the canopy itself.

Yes, that is the purpose of the big shelf thing over the bed. It is a cool air distributor, and it uses air from under the bed, and then cools it via a wall-mounted air conditioner.

Now here is the kicker. The unit itself costs about $4,500, which is a pretty high price to pay. I don’t know if that is worth the price just to be cool at night. I suppose that if you live in a region of a hot climate, then it could be cheaper than leaving the air conditioner on, right?

Something tells me that this could be one of those products that could be very cool at first, but would result in waking up chilly. It’s like when I mess with that cooler/heater units in hotel rooms. Usually I end up feeling really cold or hot in just a few hours.

By the way, I can easily see myself hitting my head on that flat thing.