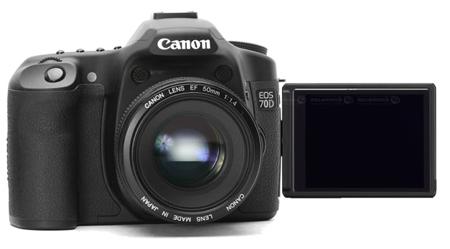 When it comes to DSLRs, I guess you could say that for most of the ordinary, average Joes out there, it is a straight battle between Canon and Nikon, as advertisements from both camps have certainly set up a very enticing “battle”, so to speak. Canon is back this time with a hard hitter of theirs, which would be known as the Canon EOS 70D, which we will look at in closer detail right after the jump.

The Canon EOS 70D is one DSLR that will target photo enthusiasts who want to take the next step in the right direction after moving on from their entry-level digital SLRs. It will boast of an innovative new Dual Pixel CMOS AF system, delivering instant and precise focusing of video in addition to still images, while also providing outstanding image quality and performance courtesy of its new 20.2 megapixel APS-C Canon CMOS sensor and Canon’s superb DIGIC 5+ Image Processor.

With Canon’s newly-developed Dual Pixel CMOS AF, this phase-detection autofocus (AF) technology that is located on the camera’s image sensor plane, it will allow users to capture video with the new EOS 70D while offering quality that is close to one found on a dedicated camcorder. Dual Pixel CMOS AF would make use of a revolutionary CMOS sensor, where the entire gamut of effective pixels are able to perform both still imaging and phase-detection AF simultaneously, helping you achieve dramatically improved AF performance compared to other EOS cameras when you are undergoing Live View shooting, as well as when shooting video.

The Canon EOS 70D DSLR would also come with an integrated wireless transmitter that will offer users several connectivity options so that they can share their images in a jiffy. You will of course benefit from the free EOS Remote app from the Apple App Store or the Google Play store, letting you wirelessly transfer photos and videos from your camera to an iOS or Android-powered device. The Canon EOS 70D will play nice with the entire range of Canon EF and EF-S lenses, in addition to SD/SDHC/SDXC memory cards. It is tipped for a September release this year at $1199.00 for the body alone, while those who want an EF-S 18-55mm f/3.5-5.6 IS STM lens to accompany it will have to fork out $1,349, or $1549.00 to have it come with the EF-S 18-135mm f/3.5-5.6 IS STM lens.