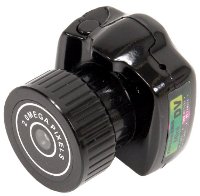 One glance at the directly translated CAMJ Tiny DSLR will leave you wondering just how far technology has come, although it is safe to say that this is no purebred DSLR but rather, called so only for kicks. After all, its form factor, albeit scaled down tremendously, does resemble that of a DSLR, but once you take a look at its specifications can capability, you can more or less think of this as a joke gizmo.
Despite its size, it can still shoot a good 2 megapixel picture at SVGA resolution, record video at 30 fps while making sure every one of those digital memories are forever stored on a microSD memory card which is all too common these days. Capable of supporting up to a 32GB microSDHC memory card, you can be sure that running out of space is something that will not happen at all throughout the CAMJ Tiny DSLR’s lifespan.
It can be juiced via an equally tiny portable external charger which relies on AA batteries as the power source, although there is the option of using a USB port as well. Each $97 purchase will be accompanied by a one year guarantee, although we don’t think that guarantees it against any loss due to its size.
Source: Red Ferret