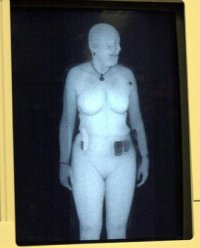 A British company has come up with a camera that surprisingly enough, goes against all things prude in Britain. This unique camera has the special ability to detect various items such as weapons, drugs and even explosives hidden under one’s clothes from up to 25 meters away, making this a potential breakthrough where the security industry is concerned. Dubbed the T5000 camera from ThruVision, it utilizes “passive imaging technology” that helps identify objects via their natural electromagnetic rays, also known as Terahertz or T-rays which are emitted.

This high-powered camera boasts the ability to detect hidden objects from up to 80 feet away, and can work just fine even when people are moving. For those who are extremely shy about their bodies and scream about privacy rights, rest assured – it won’t be able to reveal physical body details while the entire screening process is harmless. It is inevitable that this technology will see action on both the military and civilian fronts, being used in places like crowded airports, shopping malls and sporting events.

With rampant acts of terrorism having shaken up the free world over the past years, it is imperative that security precautions need to be tightened in order to prevent a repeat of 9/11 and the London bombings. According to Clive Beattue, CEO of ThruVision, “Acts of terrorism have shaken the world in recent years and security precautions have been tightened globally. The ability to see both metallic and non-metallic items on people out to 25 meters is certainly a key capability that will enhance any comprehensive security system.”

Since everyone and all objects emit low levels of electromagnetic radiation, this camera will be able to pick up all and sundry on a person. Depending on the type of material, they will feature different wave signatures, enabling surveillance officers to tell the difference between a block of clay and cocaine, or a knife and a bunch of keys. Anything to make the world a safer place I guess.

5 thoughts on “Camera sees through clothes”