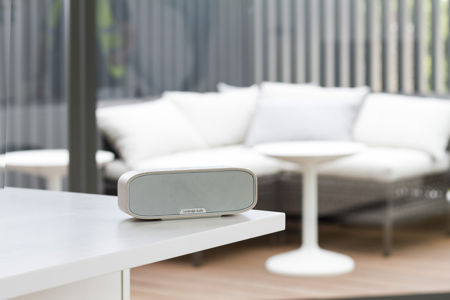 When it comes to wireless speakers, there are dime a dozen models out there that have been released, and it can be rather tricky to figure out just which particular model you would want to settle for at the end of the day. Here is yet another model that will add to your overall “headache”, so to speak, which is a good thing actually since more choices would empower you. Created in London by Cambridge Audio, the G2 happens to come across as an ultra-compact Bluetooth speaker that will boast of a large sound as well as a high capacity battery. Sporting Cambridge Audio’s extensive in-house audio expertise, your ears will be treated to superb performance as well as a sound scale which is capable of delivering far more than what its compact size belies.

The Cambridge Audio G2 will sport a four speaker array, arrive with up to 10 hours of battery life for non-stop playback, feature integrated hands-free speakerphone and a sleek and stylish design, allowing you to stash away the G2 into a bag without taking up too much space. In other words, you can always enjoy powerful tunes while you are out in the park on a bright and sunny day (and hopefully others in the park will agree to your choice of music!), not to mention its ability to charge up a smartphone with a depleted battery while you are on the move. Heck, there is also the choice of synchronizing the G2 with yet another G2, resulting in even more “boom-bastic” sound!

The wireless G2 is capable of hooking up to virtually any device via Bluetooth, and it will also boast of one-touch pairing using Near-Field Communication (NFC) technology that already arrives with the G2. Not only that, the G2 is capable of remembering up to eight different devices (be they smartphones, tablets or laptops), so you do not need todisconnect, un-pair and re-pair each time for each user. Do bear in mind that it can only hook up to one device at any one time to play music. Expect the Cambridge Audio G2 to retail for £99.95 ($159.99) a pop as it arrives later this October, where you pick from a black or an elegant champagne finish.