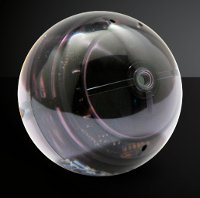 Personal video camcorders have certainly come a long way since their introduction many years ago, and technologies in such devices have also progressed by leaps and bounds that High Definition recording capability was already achieved a few years back on a pocket-sized device. Well, what else can manufacturers do to up the ante? CamBall, as you can tell by its name, could very well be the next step of evolution for personal video camcorders. After all, it measures roughly the size of a mere golf ball (!) and yet is able shoot video virtually anytime, anywhere. Sure, it will not be able to do High Definition video recording, but that is all right considering the rather miniscule size of the device.

Hitting the US market at long last, the CamBall is touted to be the smallest personal digital camcorder on the market at press time, where it comes jam packed with features. It is wearable, mountable, and waterproof sporting optional motion-activation capabilities, making it perfect for capturing home security and surveillance monitoring video, not to mention water and extreme sports footage. You will be able to choose from a couple of models which would be the CamBall SG-31 and SG-30, where the former adds motion detection to the latter’s standard features. As for their shared specifications, they would be as follows :-

Just like any good marketing team would do, the CamBall will also come with a range of optional accessories, including a CamBall mount for concealed placement alongside a power adaptor extension cord. You will be able to bring home the CamBall SG-30 for $149.99, while the SG-31 that has motion-activation is more expensive by a considerable margin at $199.99.