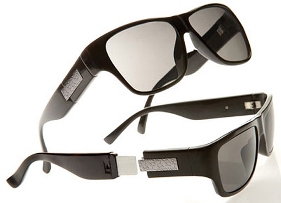 As you can see, the sunglasses come with a detachable right arm that houses the memory device itself. What you don’t see is that it has a 4GB capacity.

So the next time you are on the beach with your netbook, feel free to make a backup of your files on your sunglasses. Of course, you will have to partially disassemble the sunglasses to do that, don’t you? You might be able to keep them on your head with one arm if you don’t shake your head too much.

I suppose that the Calvin Klein memory drive sunglasses prove that just because you can make something, doesn’t mean you necessarily should. Of course, if you’re some sort of spy like Ethan Hunt (Tom Cruise’s character from the Mission Impossible films, in case you forgot) then I can think of a few good uses for them. Hopefully they are water resistant, because of that hokey scene where Cruise hangs inches off the floor, and almost undone by a single drop of his sweat.

So, if you want to store your memory in style, be prepared to pay about $199 for these guys. Yeah, that’s a little pricey considering most 4GB flash drives are considerably less than that, so I’m guessing the high price is for the shades, man.