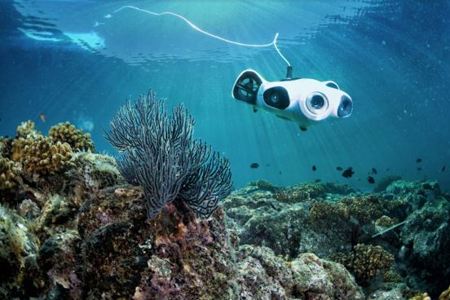 The drone fever might have more or less settled down to a certain degree, but for many of us, we would think of drones being propeller-powered pieces of hardware that take to the skies while capturing amazing looking scenes from above. Have you ever considered a change in perspective, where the drone will be capturing video and scenes from underwater? This is what YouCan Robotics has done with its latest release, the BW Space. The BW Space is the first underwater photography robot in the world that is able to recognize images as well as follow its target intelligently, delivering precise photo and video capture.

Kicking things off as a Kickstarter project, it can be yours from as little as $659 in the form of a pledge special. The BW Space Underwater ROV Submarine Drone Kit with 4K camera is not the first underwater drone from YouCan Robotics. Rather, it is the second generation underwater drone of its kind, being a follow up from the BW1 that was launched last year. Obviously, this newer generation model will carry with it smart tracking capability, enabling users to lock in their target via the YouCan app which runs on iOS and Android platforms, in order to make shooting images a more precise experience.

In addition, the BW Space also sports an automatic light adjustment feature that will intelligently adjusts the lighting based on existing underwater conditions. It is armed with a pair of 1380lm LED lights, making it brighter compared to its predecessor. Other features of the BW Space include a user-friendly remote controller, hand-held design, 4K Ultra-HD video capture, and a 12MP camera, letting you experience an underwater world in High Definition while being able to capture vivid images.

It boasts of a battery life of up to 7 hours, while it is able to store up to 128GB of recorded video and snapshots. All video will be filmed in 30fps for smooth quality capture, with the camera having the ability to rotate +45° in order to check out anything above or below, unless it is swallowed up by a prehistoric alpha predator, of course.