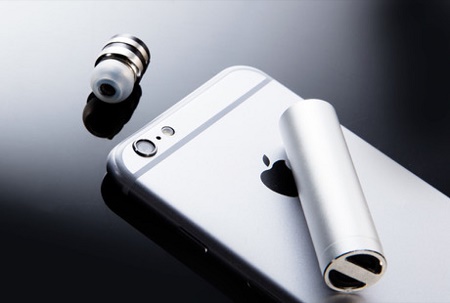 If you’re getting calls about work every 20 minutes, chances are you want to use an earpiece so you can always be at the ready to pick up the phone. It’s pretty confusing when you look like you’re just talking at air, but it’s a socially accepted thing to do nowadays. Of course, there are million different options on the market that offer this and that which tout ease of use, battery life, and so on, but how many of them are trying not to be seen and discreetly do their job?

The BULLET Bluetooth Earpiece is said to be the smallest of its kind, featuring that it is lightweight at 3.5g as well as comfortable for extended use. It will allow you to not only take calls with its built-in microphone, but also stream music for the time in between when you aren’t chatting up a storm. It uses CVC noise reduction, and says it has crystal clear sound, though that remains to be seen.

While it has a battery that will keep going for about 6 hours, it makes sure you won’t be without as it comes with a capsule for charging that can juice it up four times over. This portable capsule has a USB port on one side, and a spot for the earpiece to sink into and charge on the other, which will take it about an hour to power up again. Thanks to magnets, you won’t have to worry about it falling out while it’s charging! This is a $150 purchase for those who can’t seem to keep up with calls, but want to be prepared without flaunting the fact while going about their day.

Available for purchase on Schatzii