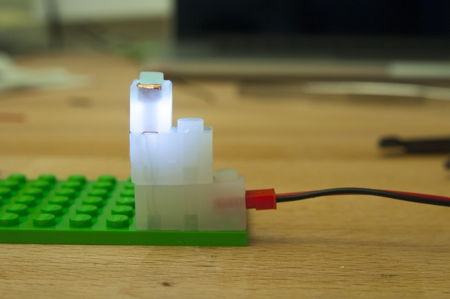 When it comes to LEGO, basically, your imagination is the limit – although having enough cash to pick up all of the different kinds of LEGO bricks too, would go a long way. How about having a different kind of LEGO bricks that might just help you come up with some really, really cool creations? What you see above is known as the Build Upons, where it would be more than welcome to any kind of LEGO collection.

Lunchbox Electronics are the ones behind the Build Upons, which so happens to be the smallest, stackable, LEGO-compatible, light up bricks. The Build Upons happen to be extremely tiny light up bricks which will play nice with LEGO bricks. With the Build Upons, you will be able to light up your robot, house, spaceship or monster, it does not matter what the creation is, but you can basically say, “Let there be light!”

Lunchbox Electronics, a company owned by a woman, has launched a Kickstarter project in order to make the Build Upons a reality. Which means, you might want to rope in as many of your friends as possible in order to make this a reality! After all, think of all of the various possibilities that you can come up with when the Build Upons hit the market.

The Build Upons system will feature a trio of bricks: an LED brick, a power brick, and a bridge brick. One can light the LED bricks by connecting them to a Power Brick, where you will have to think up of the pathways with as many Bridge Bricks as required, offering unprecedented flexibility. Build Upons LED bricks are based on 1×1 bricks so that elegant designs can be constructed, and there is no need to know any electronics to get started, now how about that?

Imagine having a LEGO keyboard with the Build Upons on it…