If you have an office that’s as cluttered with gadgets as mine, you tend to appreciate convergence products. You have to be picky about which functions you want to have packed into a single device. For instance, a webcam built into your monitor might be cool, however, a mouse that’s also a label printer is not. (Yes, such a thing does exist). Here’s one that I’m pretty undecided on. It’s a Skype phone that’s built into your keyboard.

I’ve never actually seen the point in having a Skype phone, as I’ve found using the same headset for making calls and chatting with guildmates online to be easiest. Of course, not everyone has a headset lying around, and most people are used to talking on a normal phone, which is where this comes in. It really seems like a good idea, as you’re probably not going to be moving your phone or your keyboard far from your computer. However, to keep the keyboard a decent size, they had to make the phone receiver extremely tiny. This is where they’ll likely lose people. I know that I wouldn’t want to hold onto a phone that small for the duration of a lengthy call.

Look for Buffalo to launch this in Japan this October for around $65. There’s currently no word on a US release. 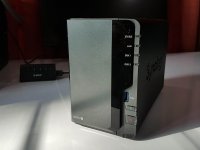 The best cordless phone for most users is the Motorola AXH03. It comes with built-in Alexa and if you download the Hellovoice app for IOS or Google Play you can also use other special features including Skype calling. 50-meters of indoor range seal the deal for us.