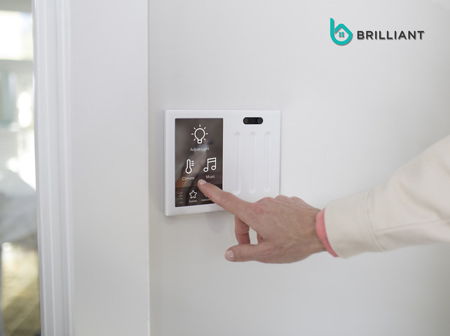 The name Brilliant itself more or less provides a pretty strong clue as to what one is able to expect — something smart, and the same applies to the all new Brilliant Control that ought to be able to jive with just about anyone and everyone. Forget about the century-old light switch design, this one comes with not only voice but also touch control for lights as well as different kinds of smart home devices.

Brilliant Control will be able to allow just about anyone in the home to gain access to music, climate, and other common smart home devices using nothing more than just a standard touch or voice command without the need for a smartphone to function as an intermediary device. You will be able to render current light switches obsolete as the Brilliant Control takes mere minutes to install, and it will also come with a touchscreen that is not only beautiful but also intuitive to operate

Those who are interested will be able to place a pre-order for the Brilliant Control from their official website. Not only that, Brilliant is pleased to note that other than just touch, motion, and voice control capabilities, individual Brilliant Control units will be accompanied by a built-in camera, privacy cover, and microphone, which makes it very easy to include video or voice intercom to a house. When it is not in use, the Brilliant Control will also be able to invite users to personalize their home, where it showcases motion art or family photos in order to add a touch of fun and relaxation. There will also be new seasonal nature scenes and theme packs made available each month so that everything does not end up stale after a while.

You can be sure that Brilliant Controls will feature Amazon Alexa to boot, making it a snap to obtain weather forecasts and sports scores in double quick time. The Brilliant Control will retail for $199 a pop as it is being prepared for a late summer 2017 release.