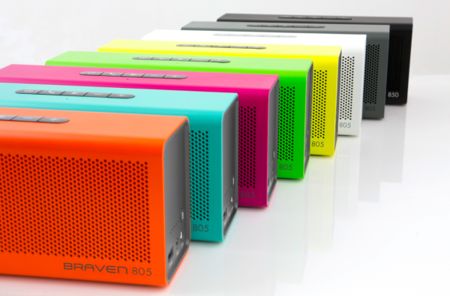 It is that time of the year again, and different kinds of companies start to introduce a wide variety of their hardware – and Braven happens to be one of them as CES kicks off officially later this week. Having released a wide range of Bluetooth enabled speakers in the past, Braven is back with the Braven 805. What is so special about this particular Bluetooth speaker? Well, for starters, it has been specially designed in order to receive a touch of color – as well as a dash of rhythm to any lifestyle. Touted to be one of the more ideal home companions out there, the Braven 805 would pack a fair amount of juice to rock any room, and it comes in a range of colors which will be able to complement interior design and décor.

There are nine different colors to choose from actually, with the Braven 805 being able to vibrantly accent a kitchen counter as well as living room table in vivid magenta, orange, and red color ways; or how about having it blend into a bookshelf with neutral white, gray and black hues? It does not matter whether it is bright or subtle, the Braven 805 will be able to satisfy even the most demanding taste.

This is more than a speaker actually, where it intends to double up as part of your home decoration. Not only that, the Braven 805 will boast of a special speakerphone capability alongside an integrated noise-canceling microphone as well as the ability to charge USB devices thanks to its powerful 4400 mAh portable battery bank. Apart from that, the Braven 805 will also come equipped with TrueWireless Technology to pair with a second Braven 805, 850, 855s, 1100, and BRV-HD speaker for left and right channel stereo sound.

Those who are interested will be able to pick up the Braven 805 later this month in white, teal, yellow, orange, magenta, green, red, gray, and black, where it comes with a sticker price tag of $199.99.

1 thought on “Braven shows off their Braven 805”