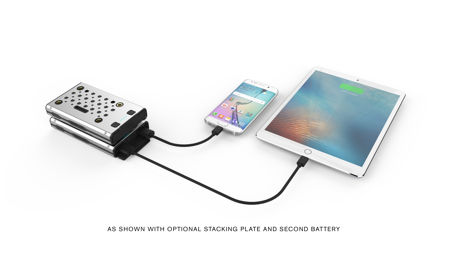 When we mention the name Braven, most of the time folks would think of some sort of portable speaker or that sort. In fact, things could not not be any different from that, as Braven does far more than just portable or outdoor speakers. Case in point, this particular modular backup battery that will certainly come in handy whenever your devices are in a tight spot and need some sort of recharging, where it will be known as the Braven BRV-Bank Pro LE, touted to be no ordinary modular backup battery, but rather, the first ultra rugged model of its kind in the world that will boast of an ecosystem of accessories that has been specially designed in order to adapt to even the most extreme outdoor environments.

If you thought that Braven’s well known BRV-Bank was already too manly for your tastes, the original Bluetooth Smart portable outdoor backup battery would certainly be unable to hold a candle to the BRV-Bank Pro LE here, as the latter is now capable of surviving full submersion thanks to its IPX7 waterproof rating, and the inclusion of a built-in 300-lumen LED flashlight, not to mention having it protected by an aircraft-grade aluminum housing for extra versatility and durability.

Apart from that, the BRV-Bank Pro LE will also play nice with all accessories from the BRV-PRO modular rugged-speaker, where among them include the solar charging panel, multi-tool, GoPro compatible action mount, and stacking plate, and all of these will enable users to stack multiple BRV-Bank Pro LE batteries on top of each other for even more power as you can see in the image above.

Being Bluetooth SMART enabled just like its predecessor, it can be remotely controlled through Braven’s proprietary app, so that users can locate the battery bank, monitor its power levels, turn each charging port on or off, and activate the “Bear” and “Find Me” modes. “Bear Mode” which turns on the smartphone’s motion sensor, to send signals to the bank to sound an alarm and trigger the flashlight when your phone is moved, while the “Find Me” mode activates the universal distress signal by sending a visual Morse code for “S.O.S.” using the flashlight.