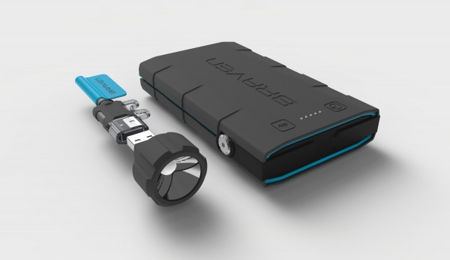 In this day and age, it goes without saying that we have a slew of gizmos that we tend to carry with us wherever we go. There is a downside to all of it though – and that would be the battery life, or rather, the lack of its longevity. Most of us will need to juice up our respective smartphones, tablets, portable media players, GPS navigation devices, and for some, even electric cars, right before we go to bed, or run the risk of having them sputter at the moment when you need it the most at some point during the next day. Boy Scouts would know how to get ready for such situations, which is why the Braven BRV-Bank might be worth checking out, being a rugged portable battery by itself.

The Braven BRV-Bank is proud to be the world’s first IP68 water-resistant and MIL-STD 810G shockproof rated power bank that will offer yet another advantage – it comes with an integrated Bluetooth technology. The BRV-Bank will be able to hook up to a custom Braven BRV Bank App, where that will allow it to wirelessly monitor battery levels, start and stop charging devices as well as locate the BRV-Bank from a smartphone or tablet.

Specially constructed from ground up to cater to the great outdoors as well as emergency preparedness, it has the ability to last a whole lot longer compared to other portable power banks that we have already seen in the market. After all, how many of such devices are able to let users locate their backup battery, turn it on and off remotely, as well as monitor the battery level? Those who are interested will be able to pick up the BRV-Bank in 6,000 mAh and 8,000 mAh options, where they will sport a couple of outputs that support up to 2.4A and will be accompanied by a ruggedized USB charging cable and USB flashlight.