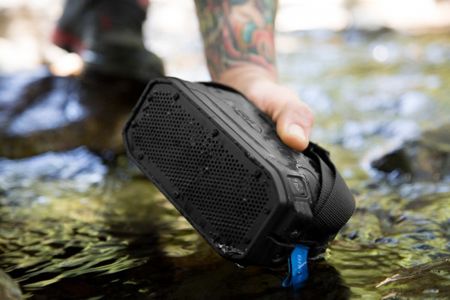 When it comes to portable speakers that not only function well, but also look good at the same time, then you can be pretty sure that one of the names that would pop into the minds of many most of the time would be Braven. After all, they have come up with their fair share of portable speakers in the past, and does not look as though they are going to shy from continuing down that path in the near future. Braven’s BRV-1M happens to be a next-generation compact Bluetooth speaker that has been specially designed to deliver the most powerful sound in the most extreme environments.

The BRV-1M has been engineered for adrenaline and adventure seekers, as this latest portable Bluetooth speaker model boasts of an IPX7 waterproof rating as well as an impact-resistant housing that is able to withstand even the most aggressive spills, bumps and drops. Just which particular target group would the BRV-1M cater to? We are looking at cyclists, bikers, snowboarders and hikers, as the BRV-1M can be secured onto almost every surface with integrated tie-down bars and included heavy-duty strap. If you are going to use it in other activities, the BRV-1M will also boast of an included Action Mount accessory that is compatible with GoPro and popular action sport mounting systems.

The BRV-1M will arrive with just about everything an adventurer requires to rock their next experience, sporting up to a dozen hours of uninterrupted playtime as well as a 2,200mAh power bank which will also double up as a smartphone charger. Heck, it will also support hands-free calling in the wild, thanks to a built-in noise-cancelling microphone. There is also a newly designed quick release cap system which will shield connections from water and dirt, and a battery level indicator provides a quick glance as to whether this needs to head off to a power outlet or not. The $99.99 asking price will see the BRV-1M arrive in Black/Red and Gray/Black color combinations.