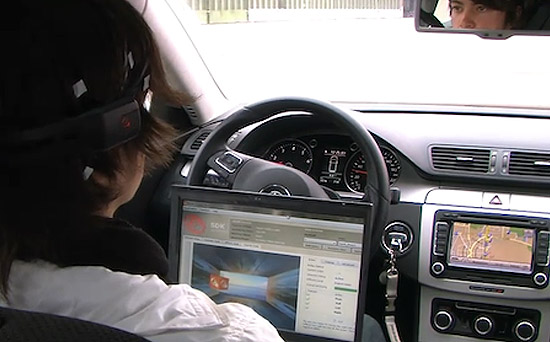 Imagine getting behind the wheel of your car, and no hands were required on the wheel.
This is the technology of BrainDriver which is under development at Freie Universität Berlin by professor Raul Rojas. BrainDriver uses a head cap with 16 sensors that allow the driver to have control over the wheel.
This is electroencephalography in action, and it is technology that is getting better every day. We have reported on computers that can do this, and all BrainDriver does is create a system for guiding the steering wheel. There’s a video after the jump so you can see how it works. You will note that they aren’t testing this on the real road with real traffic yet.
You’ll also notice that the driver seems quite young. The first thing I thought was “I am surprised he has his license”. Speaking of thoughts, I’m not certain whether or not thought driving is such a good idea. I mean, when I drive, I think an action and then I do it. This Braindriver had better be able to discern when I am thinking about making a turn and when I definitely want to make a turn.
However, if this young guy can figure it out, then I think I could probably figure it out. I guess it would be like having a limo with my brain as a driver. Perhaps this is just one stepping stone in our goal of completely autonomous vehicles.
Source