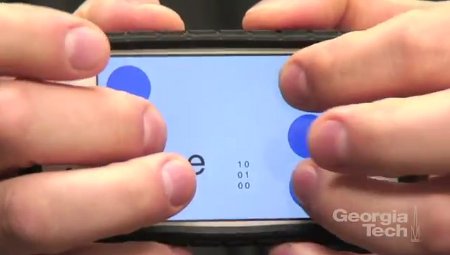 Modern smartphones come with touchscreen displays – which is not a bad thing at all, really. Just take a look at the kind of apps and games that have been written for the platform to date and tell me that it isn’t revolutionary in any way. However, while the hard of hearing can always enjoy the use of a smartphone or featurephone because they can see, how about the visually impaired? Georgia Tech believes otherwise, and has come up with BrailleTouch – a Braille-like texting app.
This prototype app for touchscreen mobile devices intends to be the complete solution to all our modern day texting problems, without having to even look at the device’s display at all – which would also bode well for the visually impaired, of course. Mario Romero, Postdoctoral Fellow in the School of Interactive Computing (IC) and the project’s principal investigator says, “Research has shown that chorded, or gesture-based, texting is a viable solution for eyes-free written communication in the future, making obsolete the need for users to look at their devices while inputting text on them.”

You can check out just how BrailleTouch works in the video that you see below, and it might also help normal folk to bridge the gap with the visually impaired, since this free open-source app incorporates the Braille writing system. Initial studies that surround BrailleTouch alongside visually impaired participants who are proficient in Braille typing have shown that they are able to input at least half a dozen times the number of words in each minute when compared to other research prototypes that also have the same end game objective in mind – that is, eyes-free texting on a touchscreen display. These users were extremely proficient, being able to reach up to 32 words per minute with an accuracy level of 92%, now how about that? Imagine what kind of speed and accuracy can be achieved when the prototype app is finally polished.