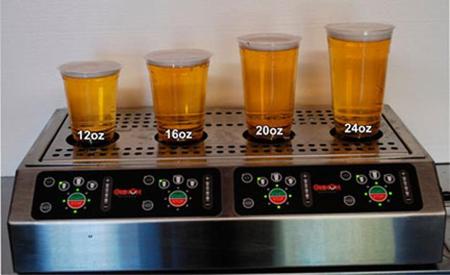 Do you like to booze? If you have answered in the affirmative, then you would surely like to read more about the Bottoms Up Draft Beer Dispensing System. The name itself does tickle the imagination somewhat – imagine a revolutionary system that fills up cups of beer in a different way, in a manner that the device’s name suggests – from the bottom to the top. This is definitely thinking out of the box, and I am quite sure that folks who love to drink their beer with a decent amount of head and from a frosted glass would have objections. Reason being, GrinOn Industries’ invention would fill up beer cups from the bottom, and that begs the questions, why are we drinking from plastic cups, and where’s the head going to go to, if any?
Well, for those who prefer to stick to the adage, “waste not, want not” would find the Bottoms Up Draft Beer Dispensing System to be rather useful, where it is said to fill up a cup of beer faster and more efficiently when compared to the standard tap. It will not be able to work with any other cups, as proprietary cups are required. These proprietary cups will feature a magnet-ring seal along a hole in the bottom, where the machine will push the cup down onto the special designed dispensing tap, that can hold up to 4 beers simultaneously.
The magnet will be lifted while the cup is filled, all in a hands-free manner. The moment the cup reaches capacity after taking in readings from the automatic valves which will switch off based on a volume input, the cup will then be lifted away from the machine, with the magnet pulled back in place to help seal the bottom of the cup. GrinOn claims that the Bottoms Up system works 9 times faster, and will make use of 96% of the keg, which is a far higher figure compared to the existing national average of 70%. Would you like to see the Bottoms Up Draft Beer Dispensing System in action at your local tavern?
Source