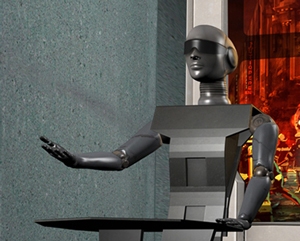 E3 had many expected surprises. I realize that this sounds like an oxymoron, but I think we all knew before it began that Microsoft would have its Kinect (formerly Project Natal), Sony would have the Move, and Nintendo would have the 3DS.

I suppose that the theme of E3 would probably be “Into the Game”, as it would appear that game-makers are doing more to get players off the couch and immerse them into a three-dimensional video game world.

While perusing through the booths, I discovered another type of video game that could have great potential for changing video games. This is a screenshot from Bot Colony, the “First Real Conversation Game Ever”! As you can see, the graphics aren’t exactly state of the art, but I sense that they are only temporary to show the proof of concept. I wouldn’t say that the concept works as yet.

In other words, yes, I can talk to the game, and it can talk back, but it isn’t Knight Rider’s K.I.T.T. just yet. Even though I could use a mic to speak to the game, I chose the traditional typing in my questions.

Apparently, the game can “understand” me, but there were several times where it clearly misunderstood me. Also, I didn’t understand what I was supposed to be doing in this game, so I was sort of at a loss for words. I’m guessing that this game, when it is finally perfected, will be like playing Myst but instead of clicking on things to get further along in the game, you will have to ask the right question. You may have to word it precisely, if this demonstration is any indicator.

However, I can see them pulling off a computer that can talk back like a real person. When it does, will online chatters have someone new to talk to that isn’t actually there? The possibilities are as wonderous as they are horrendous.

Bot Colony will be available to test out on August 16, 2010, and you can sign up for it here. I beleive it is only available for English speakers only, though.