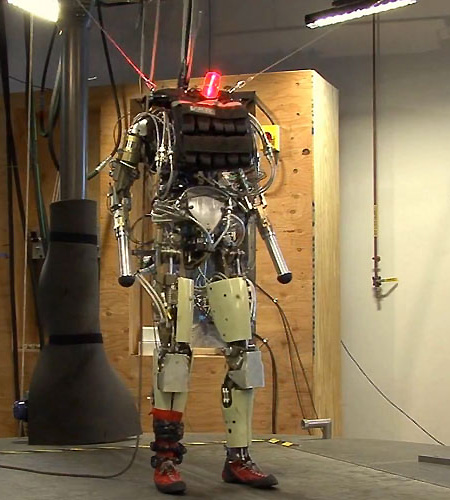 Some of you might remember when we reported on Boston Dynamics Alpha Dog, which is essentially a giant robotic Great Dane. What you are seeing here is PETMAN, which is an acronym for Protection Ensemble Test Mannequin, and it looks like the robot you would build if you wanted to take the Alpha Dog for a walk.
Actually, the reason why Boston Dynamics built PETMAN was to test out clothing worn by soldiers. As you can see in the video after the jump, the PETMAN can easily drop and give you twenty.
Yeah, I thought that this was one of those Terminator robots with a red siren for a head, and it bore a strong resemblance to the robot Hector from Saturn 3. I finally got around to seeing Real Steel a few nights ago, and I couldn’t help but wonder how far we are from real walking boxers of steel. I would imagine that no CG would be required.
It took Boston Dynamics 13 months to design this and 17 months to build, and PETMAN weighs 180 pounds and six feet tall. It can even simulate human reactions like breathing, sweating, and body temperature changes. Don’t worry, this is just a robot to test out human clothing, not to replace humans! At least for now.