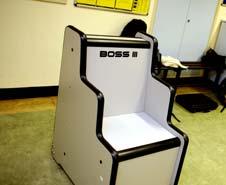 You know, I just really don’t want to report on this, because I cannot stand anal-related prison jokes. However, this is something that just begs for it.

So what is this I’m reporting on anyway? Oh, yeah, the Body Orifice Security Scanner, or BOSS, for short. It is a mobile chair with three sensitive sensors that can detect metal items as small as a paper clip or pin.

Do not ask me why an inmate would have a pin or paper clip up their…ahem. Actually, I heard that the real worry is that prisoners might bring in memory cards for cell phones, and could make some drug deals. Actually, I’ve heard that some prisoners can smuggle entire cell phones up their (oh, man, don’t make me write it. Now my readers are going to have to think about it!)

This whole BOSS program is taking place in England and Wales, and they cost quite a bit. Prisons Minister David Hanson recommends them for every prison to counter the smuggling problem.

Let me tell you who doesn’t want this: Michael Scoffield, from the show Prison Break. Just think about how his latest plan to bust out of the joint is going to be thwarted with a device like this penetrating the only part of his body that isn’t tattooed.