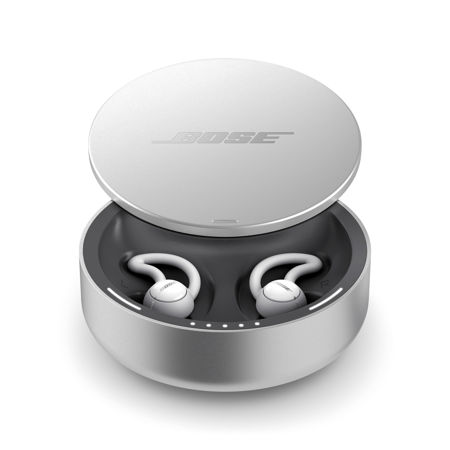 Sleep is not something that all of us should take for granted. For some of us, getting some shuteye is a chore, something that we want for it to happen so much, and yet it is so difficult to do despite obtaining additional chemical assistance from the pharmacist. Just in case you have tried just about everything else and are at the end of your rope, why not see what audio specialist Bose has in store? Their revolutionary noise-masking Sleepbuds might just be the last piece in the “puzzle”, where this pair of tiny yet truly wireless earbuds that arrives in an ultra-comfortable design will play back soothing sounds in order to block, cover, and replace the most common noises that interfere with sleep.

Bose is proud to claim that the Sleepbuds are the smallest Bose product to ever roll off from their assembly lines, where it comes packed with proprietary technology. Arriving with 10 pre-loaded “sleeptracks” that mirror the regular frequencies which are emitted through snoring, neighbors, dogs, traffic, and others, you will instead be treated to a layer of relaxing audio. To ensure a more comfortable rest, the Sleepbuds will also boast of new patented ear tips that deliver a snug, soft, barely-felt fit, with enough battery life to run for up to 16 hours — which is more than enough for anyone to get an adequate amount of sleep.

Noise-masking is considered to be a science, making it far more than just ambient sound or white noise. Turning up the volume on a calming soundtrack is not good enough, while earplugs can only do so much to block noise, being extremely uncomfortable when worn for hours on end and all the more so if one sleeps on the side. With the Sleepbuds from Bose, all of those issues are eliminated, with each bud tipping the scale at a mere 1.4 grams while measuring approximately 1cm wide and high. Arriving in a high-gloss white finish, the Bose Sleepbuds will have an asking price of $249 per pair.