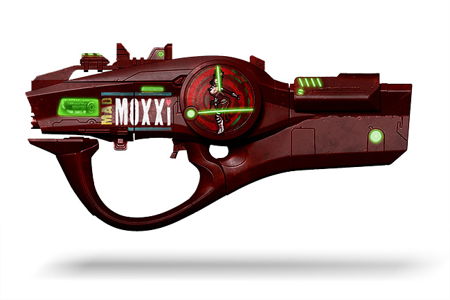 Borderlands 2 – yes, it might be an “oldie” in terms of gaming standards (relatively speaking, anyway, as anything that is older than a year is definitely considered archaic in the world of technology and gaming), but it certainly is a goldie. After all, we have taken a look at the Borderlands 2 Swag-filled Limited Edition Diamond Plate Loot Chest in the past, but this time around, avid collectors who would want far more than a loot chest can check out this rather pricey, but well worth every penny – $649.99 Miss Moxxi’s Bad Touch Full Scale Replica.

Yes sir, this is a full size replica of Miss Moxxi’s Bad Touch SMG from Borderlands 2, where it is made out of polystone while boasting the likes of LED effects for that added touch of reality. You would definitely want to be extra careful posing with this puppy though, especially since it already cost so much in the first place, not to mention tipping the scales at a whopping 20 lbs – which is a whole lot heavier than all the other toy guns out there in the market. Oh yeah, to make it even more exclusive, there will only be 500 units worldwide, making sure that this is as limited edition as it gets. Of course it will run on batteries, but we are not quite sure what type is relies on just yet.