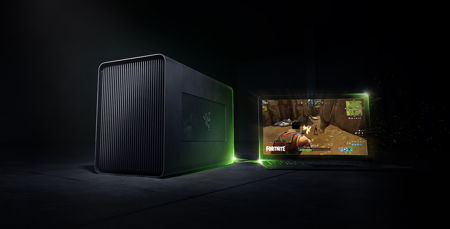 When it comes to gaming peripherals, there are very few leading contenders out there that deliver nothing but quality and performance, and Razer is one such company. Razer’s latest foray would be the Razer Core X, an external graphics enclosure is touted to unleash the ultimate graphics boost for laptops, as it frees up more space with its small form factor while giving an adrenaline boost to your laptop’s graphical performance each time it is hooked up to it, all without having to break the bank. Compatible with Mac Thunderbolt 3 laptops now, virtually anyone is able to unlock desktop-class gaming performance on their respective laptops. Get yourself a great gaming keypad with it and you are ready to go! Keep in mind though, that it won’t improve your soundcard, so you should make sure to get proper gaming earbuds.

The new Core X will transform integrated graphics laptops such as the Razer Blade Stealth into desktop-class gaming machines, all through the addition of an external graphics card. Not only that, gamers who look forward to the future will be able to stave off the monster of obsolescence with the Core X, while being prepared to enjoy VR-Ready experiences through a boost in the existing laptop’s performance and hardware specifications.

Specially designed with a standard Thunderbolt 3 connection, the Core X is extremely versatile and will play nice with not only Razer Blade laptops, but also different kinds of systems that run on Windows and macOS. In particular, Windows 10 Redstone 1 or later and macOS High Sierra 10.13.4 or later, while being compatible with selected AMD Radeon cards. As for Razer compatible laptops, those comprise of the Razer Blade Stealth, Razer Blade, and Razer Blade Pro (GTX 1060 version). Other Windows 10 laptops will require a Thunderbolt 3 port with external graphics (eGFX) support. Moving the main GPU outside of your laptop can drop the internal temperature of your machine quite a bit, however we still recommend a good cooling pad, just to be sure.