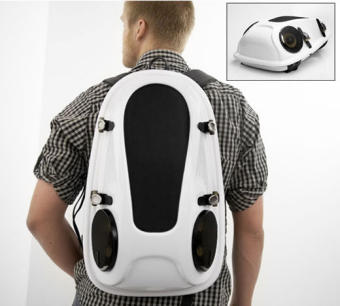 Do you remember back in the day when people were all walking around with boomboxes up on their shoulders? I actually never saw anyone do that near where I lived, but I guess it was popular in the big cities. Those days have all since passed, however, this Reppo II backpack seems to be trying to bring it back in a new way.

This backpack is just nuts. It is made of a hard outer shell which houses not only a pair of speakers, but an amplifier too. I don’t know about you, but I wouldn’t want that thing buzzing up against my spine for any length of time.

This is currently only a concept idea, though at least one prototype has been created. I have to admit that this does look pretty cool, though it doesn’t seem very practical. I just want to get a picture of a Stormtrooper wearing one of these.