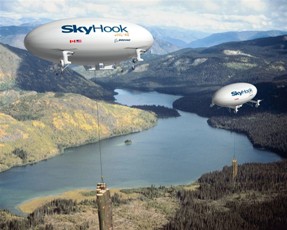 I grew up near Seattle, Washington, and one of the biggest companies in the area is, of course, the Boeing Corporation. They have a testing field located outside the city that is almost as big as Sea-Tac Airport. The aviation giant recently announced the development of the Skyhook JHL-40.

The Skyhook is a terrific looking aircraft with eight engines. Four of them are vertical rotors that can give some extra lift, allowing the airship to lift 40 tons. The other four engines are directional propellers to control the precise movement of the Skyhook.

What I would give to live close to Boeing again as they develop this advanced airship. Not only is it a quantum leap over the Goodyear Blimp, but very environmentally friendly. The Skyhook has a reduced carbon footprint, and does not disturb the landscape like an airplane or helicopter.

It can also transport cargo and crew 200 miles without refueling in adverse environments such as the Arctic. Boeing is very confident that this airship will have a great influence on the logging industry, hence the concept graphic of it lifting tall trees.

Personally, I think this Skyhook is very cool overall, and reminds me of Victorian visions of the future, when we believed that our skies would be full of airships. I can’t wait for the day when I see it fly over my head. I just hope I believe the guy that says: “Look, it’s the Skyhook blimp!”