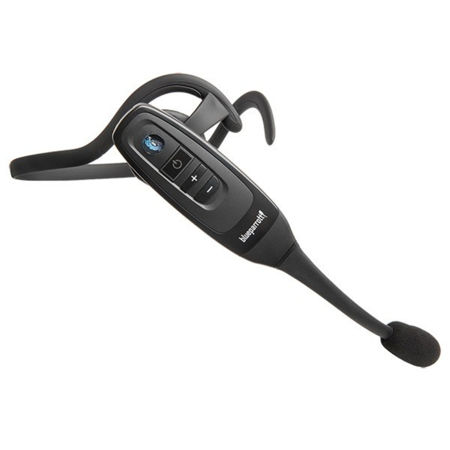 There was once a time when Bluetooth headsets were all the rage; and that was close to two decades ago. Phones were just that, phones, and there was no such thing as a modern day smartphone with a full touchscreen display, although it well on its way to the existing smartphone design with the advent of the Palm treo and its ilk. Nokia ruled the roost back then, and a hands-free headset was something that was fast catching on, with more and more people being able to afford mobile phones. A Bluetooth headset was considered to be something of a luxury, a fashion statement even. Fast forward to today, and Bluetooth headsets and transmitters have not deviated from its function, and rarely from its form. Enter BlueParrott’s C400-XT Bluetooth headset.

The C400-XT convertible intends to turn heads in the same way that a true convertible on the road does. This is a premium quality Bluetooth headset, where it boasts of a flexible choice when it comes to wearing styles, is IP rated water resistant and also works great even when the mercury drops to levels that require more than just a single layer of summer clothing. Specially designed to meet the needs of professionals on-the-go, it also features noise cancellation technology, enabling users to take calls while they are on-the-move without missing a beat.

The C400-XT has also been engineered to best fit the mobile worker’s hectic lifestyle, thanks to the availability of customizable wearing options. In other words, you can opt to wear the headset on either ear, around a hat, or choose from one of the two behind-the-neck options. The headset itself is able to stand up to the rigors of real-world use, and also sports VoiceControl — giving it the ability to receive calls or ignore them in a totally hands-free manner. Available from early this October onwards, the BlueParrott convertible C400-XT Bluetooth headset will retail for $139.99.