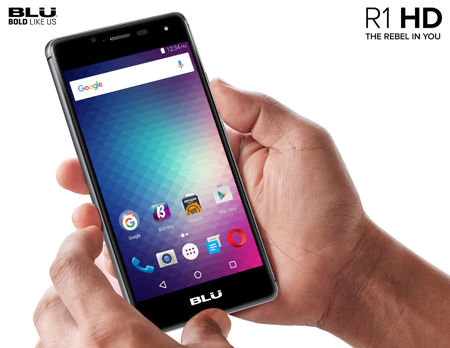 Smartphones do seem to be released in a thick and fast manner in this day and age. I do not blame the hardware manufacturers for doing so, since this is an extremely competitive market, and it is not often that the handset with the most features wins out in the end, as there is a myriad of other factors to consider including after sales hardware and software support, ease-of-use when it comes to the hardware as well as software, and brand presence. BLU is one of the names that have rolled out pretty decent smartphones that are accompanied by prices that do not break the bank – with the Vivo 4.8HD being one of them earlier this year. This time around, there is another people’s phone from BLU, where it is known as the R1 HD smartphone.

Being one of the fastest growing mobile phone manufacturers in the world, the BLU R1 HD would be the latest addition to the BLU smartphone range that arrives in a stunning design as well as premium build quality, all without burning a large hole in your pockets. Touted to be a value-for-money proposition, the BLU R1 HD prides itself in being the sole unlocked smartphone that does not cost more than a Benjamin, while carrying an array of high end features as well as delivers a performance level that is more than average.

We are looking at a vivid HD display using the latest on-cell touch panel technology with a brightness rating of 420 nits, a wide angle 5MP selfie camera with LED flash, integrated selfie enhancement camera software, a 1.3GHz quad-core processor, 4G LTE support, an 8MP camera at the back, a microSD memory card slot for expansion purposes, and a choice of either 8GB of internal memory and 1GB of RAM or 16GB of internal memory and double the amount of RAM. All of those are crammed into an aluminum metal chassis with an accompanying beautiful curved Corning Gorilla Glass. It will run on Android 6.0 Marshmallow and can be upgraded to Android N (Nougat) when that arrives.