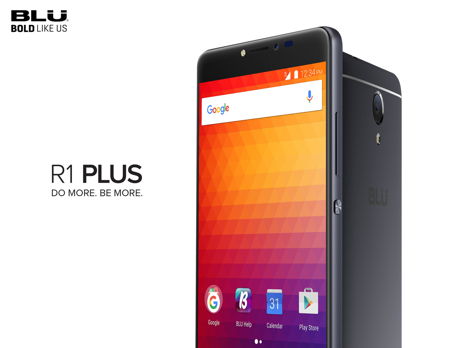 BLU has always managed to roll out smartphones that were not only affordable, but were also full well capable of punching above their weight or class. The latest handset to hit the market? The BLU R1 PLUS, which is actually the sequel to the BLU R1 HD. Touted to be the top selling unlocked device in the US back then, the BLU R1 PLUS is set to impress further by offering a slew of key improvements which should see it make quite a splash among users.

The BLU R1 PLUS will have its main focus on stunning design as well as premium build quality, all without having to break the bank for those who are interested. It will also sport a larger sized form factor as opposed to the BLU R1 HD, and I am quite sure that many people are interested to know just what kind of improvements have been made to the device that would make it all the more interesting to pick up.

Riding on its name, the BLU R1 PLUS, it claims to offer users just about everything that they have ever wanted in a smartphone (at a budget price, of course), and then some. Customer feedback concerning the BLU R1 HD on Amazon.com has greatly helped in shaping what the BLU R1 PLUS is all about. For starters, the BLU R1 PLUS will now arrive with a stunning 5.5-inch HD Curved Glass display with On-Cell Touch Panel and Gorilla Glass 3, a new and improved 13-megapixel sensor as the main camera with a 5-megapixel shooter in front, a monster 4,000 mAh battery that ought to be able to deliver far more than expected in terms of performance, not to mention charging capability support thanks to the included 5V/2A charger.

The 64-bit MediaTek 6737 1.3GHz quad-core processor and Mali-T720 GPU is also a potent tag team that ensures better performance and enhanced battery efficiency, while you get 32GB of internal storage, 3GB of RAM, and a microSD memory card slot for expansion purposes. Arriving with Android 6.0 Marshmallow right out of the box alongside a guaranteed upgrade to Android 7.0 Nougat, the dual SIM capable BLU R1 PLUS will retail for $159.99 unlocked in Gun Metal Grey.