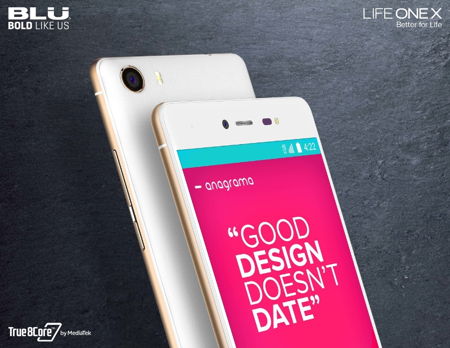 When it comes to smartphones, there are many different manufacturers to choose from – although you can be sure that some of us would pretty much prefer to stick to the tried and tested “formulas” of established brand names such as Samsung, Apple, LG, Huawei and Motorola. Don’t forget that there is a host of other smartphone manufacturers out there, especially the ones from China like Oukitel and Xiaomi, not to mention OnePlus. BLU Products is also one of the fastest growing mobile phone manufacturers in the world, where the company has just announced the Life One X that will be the latest model from the BLU LIFE family of smartphones that intend to offer premium build quality with flagship performance, all without breaking the bank. A noble effort, surely!

The BLU Life One X is no slouch when it comes to performance either, especially when you compare it against the notable Moto G 3rd Generation, the BLU Life One X was able to outperform it in just about every category possible – Antutu benchmark, Geekbench 3 Single-Core test, Geekbench 3 Multi-Core test, the Vellamo Chrome Browser test, Basemark OS II, Gfx Open Gl 3.1 High Level test, and Geekbench Battery Test.

For those who are interested in picking up the BLU Life One X, you will be able to do so on an exclusive basis at Amazon.com, where it will be sold as an unlocked device with Dual SIM compatibility for $149 a pop. That kind of money will include a leather flip view case and premium stereo headphones within the box itself.