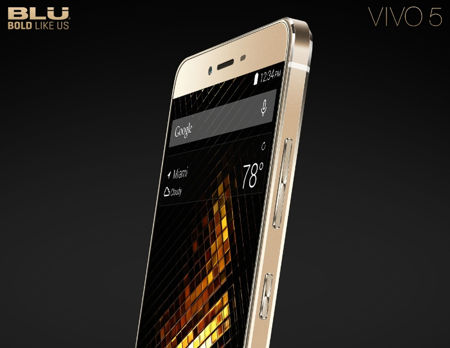 Ah, it certainly does look as though progress has been made where BLU’s collection of smartphones is concerned, where a couple of years ago, we talked about the BLU VIVO 4.8HD smartphone which more or less packed quite a decent punch back then – fast forward to 2016, and what do you get? Well, the folks over at BLU have decided to reveal a couple of new VIVO smartphones at CES this year, which will be known as the Vivo 5 and Vivo XL.

Needless to say, BLU is extremely proud of these two devices, citing them to be the most advanced and stunning smartphones that BLU has ever launched without requiring users to break the bank, so to speak. Regardless of which particular model that you decide to settle for, these devices will boast of a powerful and yet efficient 8-core 64 Bit processor courtesy of MediaTek, where it will also be accompanied by a beautiful and vivid SUPER AMOLED display for a user experience that is way superior to its competitors, or at least, this is what BLU claims.

Being smartphones from BLU that will sport their first ever full metal body design, this is yet another landmark achievement by the company. The BLU Vivo 5 and Vivo XL will both run on a MediaTek 4G LTE MT6753 Tru Octa-Core 64 bit processor, where other shared hardware specifications include a 5.5” Super AMOLED display that has been bonded with a scratch resistant and durable Corning Gorilla Glass 3, a 13MP shooter at the back as well as a 5MP wide-angle selfie camera, with the former sporting f2.0 Aperture, 5 piece sapphire blue lenses, and Phase Detection Auto Focus (PDAF) that captures focus in one tenth of a second, apart from a USB Type-C 2.0 port, Fast Charging support, and Hi-Fi DTS audio, among others.

The BLU Vivo 5 and Vivo XL will also run on a 3,150mAh, with the former arriving in a 6.9mm body while the latter is a wee bit thicker at 7.5mm. There is no Full HD for either display though, which is a bummer, since it maxes out at just 720p, but then again the asking price of between $149 and $199 for both models as unlocked devices are pretty much in line with what is expected.