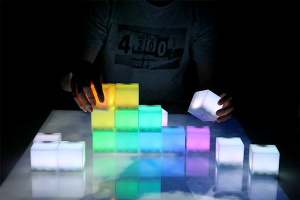 Bloxels aren’t just any blocks, but they can change color and glow. Of course, it uses the power of technology to create this luminous and colorful effect.

Think of it as some colorful Legos, and each of the blocks has a transmitter so you can make some beautiful designs. Bloxels are not just some glowing cube, but the Bloxels work by obtaining its color data from the lower level Bloxel. Somehow the data is transmitted through a series of infrared high-speed flickers.

Bloxels are the creation of Jinha Lee, who had a vision of pixels that “escaped the monitor screen and became controllable by people”? I suppose the name Bloxel comes form a combination of the word “block” and “pixel”.

Each Bloxel consists of two full color LEDs for display, nine infrared LEDs for data transmission, a photo detector, battery, and micro controller. As I mentioned before, this is from the creation of Jinha Lee, but there doesn’t seem to be any toy companies in line to purchase this. I suppose that it could be sort of educational, and maybe they could figure out a way to make the blocks in all sorts of building block shapes. Of course, there are a lot of batteries to be sold separately here.