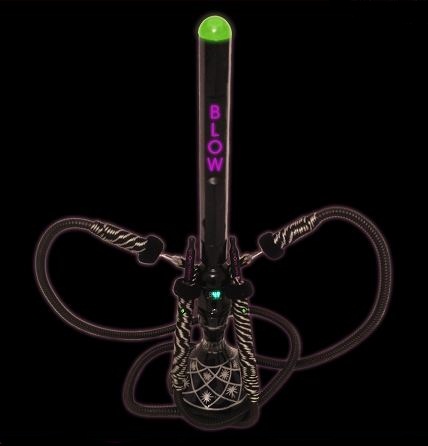 There are two vices associated with night life. One is drinking, and the other is smoking. While neither of these will kill you if you proceed with caution and use them in moderation, a ‘night out’ tends to overdo it. Just as there are many different kinds of drinks, there are also varying methods of smoking. Recently, a lot of smokers have been switching to vaporizers. No ashes to worry about, and your potential for health issues is reduced to some degree.

Taking smoke into your body is never a great idea, but at least this a better option, right? If an e-cig is too boring after a while, you might want to try smoking in a new way. The Blow Hookah will give you just that. This is merely a social tool to have friends over for a smoke, but at least they’re trying to update an old system. While these bright neon colors and sleek casing make it look like it belongs in a night club, it could work in a home if that’s your bag.

This electronic vapor system will replicate the feeling of being at a hookah lounge, without pumping you and your guests full of toxins and tar. You don’t have to worry about poking holes in tin foil, getting out shisha, or replacing the coals. It comes with the base, a battery, two electronic hoses, and two liquid e-tanks. It has an LED at the top for ambiance, and will cost you around $700. If you’re wanting replacement tanks, they’re $10 a piece, so expect to chuck in an extra $100 once all is said and done.