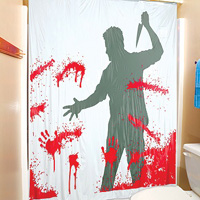 The most notorious mama’s boy of all time has got to be Norman Bates from Alfred Hitchcock’s Psycho. He takes the term and brings it to a whole new level of derangement. The only problem is that the original Psycho wasn’t much of a slasher flick. It was built more around suspense than anything else.

But for those who are fans of blood and guts, you might have been slightly disappointed by what they get from the Hitchcock thriller. There have been Psycho themed shower curtains in the past, and really, how could there not be with that famous bathroom scene? But none of them show much bloodshed. This Sound/Motion sensing Bloody Shower Curtain fits the bill for those of you who are more in to slashers than suspense.

The design isn’t the only special feature of this curtain. The sound and motion sensors allow for a clip of the Psycho theme and a woman’s scream to play when activated. While the faint of heart might be hesitant to get a shower curtain of this caliber, all of you horror movie freaks out there should be happy with your new bathroom decor.

The Bloody Serial Killer Shower Curtain won’t be available until August 15, but on that date you’ll be able to turn your bathroom into a horror film for only $20, plus a few extra bucks for batteries if you want them included. Check out more info at Things You Never Knew Existed.