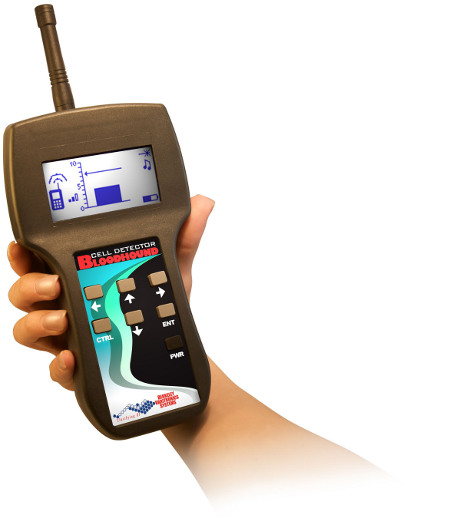 Heard of Berkeley Varitronics Systems before? Never? Well, take note of the company now as they have just annonuced a new advanced hand-held cellphone detector, where it is aptly known as the Bloodhound, paying homage to our four-legged friends who fall under that category, boasting a keen sense of smell. The Bloodhound is able to empower security officers to scan real-time for unauthorized cellphone activity in correctional facilities, helping detect the precise location of the caller courtesy of a Direction Finding Antenna.

Interestingly enough, I just found out today that security officers are losing the battle since contraband cellphones get more commonplace, being smuggled into correctional facilities so that criminal activity can continue behind the bars. Locating and confiscating contraband cellphones which are being smuggled can be a tricky task, even with the help of monitoring sensors, X-ray scanners, metal detectors, drug and bomb dogs. Even cellphone jamming isn’t sufficient to address the growing problem of handset smuggling, which is why the Bloodhound cellphone detector was invented. It is definitely a boon since it is capable of detecting a cellphone within a correctional facility without interfering with citizens’ or public safety communications.

Just like its flesh-and-blood counterpart, the Bloodhound was designed to track down and pinpoint contraband cell phones without interfering with authorized communication channels. It uses a high speed scanning multi-band receiver harnessed to a DF-Direction Finding Antenna, enabling security officers to ‘sniff out’ the RF energy – similar in method as to how an actual Bloodhound dog is able to detect a scent which a human could never discern. The Bloodhound’s special algorithm can trigger on to a cellphone while it is still active, and a headphone jack with a progressive audible alert tone and an accompanying vibrator is able to alert security officers of cellphone activity whenever they get closer to the source. Don’t you think that teachers in schools and lecturers at colleges would love to get their hands on the Bloodhound as well?