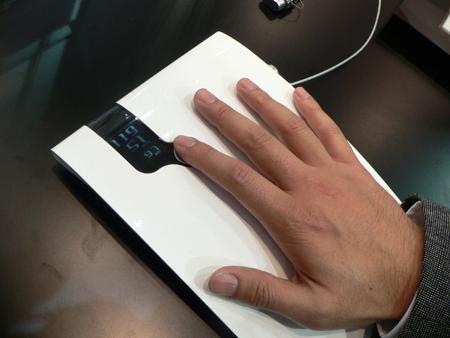 I am quite sure that most of us would have had our blood pressure readings taken at least once in our lives, and more often than not, all of those instances were probably marked by you rolling up the sleeve of the shirt you are wearing, in addition to having slip your entire arm through the cuff that is connected to the blood pressure meter. Someone will then start to press this balloon-like ball and the cuff will tighten itself around your arm like a boa constrictor – holding it in that position for a few seconds, before pressure is released and the cuff loosens like a dead snake. You feel blood rush back to the rest of your arm, as you peer over the doctor’s table, hoping to see some favorable readings. Well, this blood pressure meter blows all common convention and wisdom out of the water – as there is no cuff on it to begin with.
The Nihon University recently exhibited a blood pressure meter which allows someone’s blood pressure to be read simply by touching it with a finger. This is something new and unheard of, and if you were at Medica 2012 which happened in Dusseldorf, Germany, from November 14th to 17th, 2012, you would have seen it in action. The lack of a cuff means it is a whole lot easier to measure the blood pressures of babies as well as elderly folk without making them feel uncomfortable.
Just how is this achieved? Well, blood pressure is measured in the first place through the simple touch of a button-shaped area (which is rather small) on the meter itself. There will be LEDs as well as photo transistors which are embedded in the area, and the light that is emitted from the LEDs will be reflected on a finger, where the photo transistors will get to work, detecting it. Further details of the measurement method was not disclosed by the university, but it was based off a technology called “Phase Shift Method”, the brainchild of Sadao Omata, professor at the College of Engineering, Nihon University.
Source